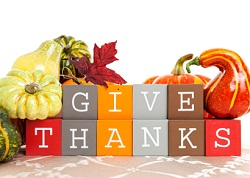 If you have school aged children, they would tell you that Thanksgiving started with the Pilgrims who landed at Plymouth Rock back around 1621. By the 1660’s though, it was becoming a New England tradition to hold a harvest festival. The first nation-wide Thanksgiving was declared by President George Washington in 1789 “as a day […]